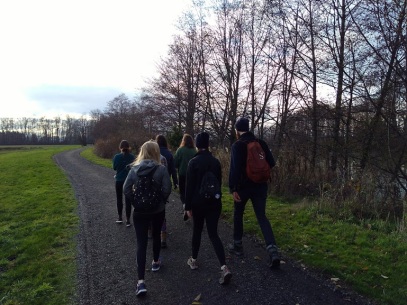 This past Saturday, Reconnect Earth led a group of eight Western Washington University students on a hike at Hovander Homestead Park just west of Ferndale, WA, to experience and learn about life on the Nooksack River. Originating from snowpack high on the slopes of Mount Baker and Mount Shuksan in the North Cascades, the Nooksack flows all the way to the Salish Sea and is the northernmost major river in Washington. Hovander Park lies on the southern bank of the river and is a great place to see some of the animal and plant life this waterway supports.

We began by discussing the long human history of the Nooksack River, which since time immemorial has been an important fishing ground for Indigenous peoples including the Lummi, Nooksack, and Semiahmoo. Our group then followed a trail which followed the wall of vegetation growing along the riverbank. Huge cottonwood trees rose above the smaller alders, willows, and red osier dogwoods. We also paused to examine and talk about many of the introduced (and in some cases, invasive) species–including Himalayan blackberry, English holly, and fox squirrels–that now call this area home.

Our exploration eventually took us to an access point where we could get down to the edge of the river itself. Swollen with fall rain, the Nooksack rushed by as we watched from the muddy bank. The view of the river was impressive–but nearby was a reminder of threats to this important waterway. A post in the riverbank marked the site of the Puget Sound Pipeline, a branch of the larger Trans Mountain Pipeline which crosses into Washington State from Canada. Much of the oil transported in these two pipelines comes from the Alberta tar sands, one of the most environmentally destructive projects on the planet.

We discussed the controversy over plans made by Kinder Morgan, the Trans Mountain Pipeline’s former owner, to more than double the capacity of that line and perhaps expand the Puget Sound Pipeline as well. In Canada, public opposition led by Indigenous First Nations eventually convinced Kinder Morgan this year to drop its expansion plans–but in August the Canadian government announced it would buy the pipeline and attempt to build the expansion with taxpayer dollars. In this way, Canada’s government became the sole owner of the pipeline which we stood above on the Nooksack’s banks. 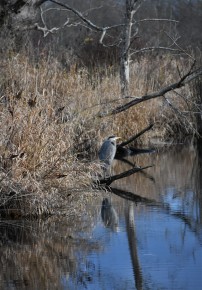 Any further expansion of the Puget Sound Pipeline poses a threat to wildlife–like the great blue heron at left–and people along the Nooksack who would be devastated in the event of a pipeline rupture and oil spill. Fortunately, Trans Mountain’s expansion was at least temporarily halted by a Canadian court ruling which found the government had not adequately consulted First Nations before issuing a project permit. However, the Canadian government still hopes to move forward with the expansion and export even more tar sands oil into the U.S. Washington can play a vital role in defeating this plan for good by denying any proposal to enlarge the Puget Sound Pipeline and by reducing oil consumption here in one of Canada’s largest oil export markets. 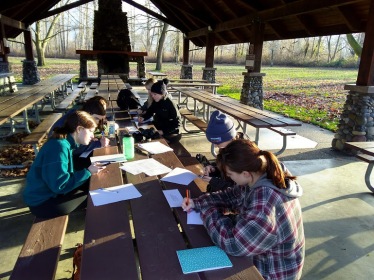 After discussing the pipeline we continued following the Nooksack until reaching our turnaround point, after which we partially retraced our steps then took a side trail that led to a sheltered picnic area. There, members of our group wrote letters to Bellingham’s Climate Action Taskforce expressing support for moving the city to 100% renewable energy as swiftly as possible. This is one of many ways Washington can reduce demand for tar sands oil and render projects like the Trans Mountain expansion obsolete. We also talked about the importance of engaging in the upcoming state legislative session, which presents an opportunity to pass climate and clean energy policies at the statewide level. 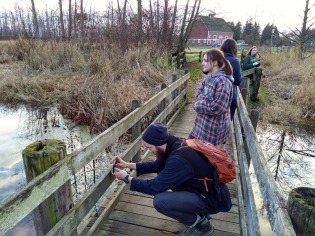 After leaving the shelter we stopped in a patch of marshland to admire some mallard ducks and a heron. Our group’s last stop was at one of Hovander Park’s most distinctive landmarks: a wildlife viewing tower that offers a birds-eye view of Tennant Lake. As we watched, a swan flew into view and coasted to a landing on the water’s surface right beside another of the great white birds at rest on the lake. Like the Nooksack River itself, Tennant Lake is an important habitat for countless migrating birds.

We concluded our trip to Hovander Park having witnessed the area’s beautiful plant and animal life, discussed some of our region’s most pressing environmental issues, and taken concrete action to push Bellingham in the direction of a clean energy future. It was a good way to finish Reconnect Earth’s last Fall 2018 trip. Stay tuned, as we’ll soon be announcing more trips for Winter and Spring 2019!